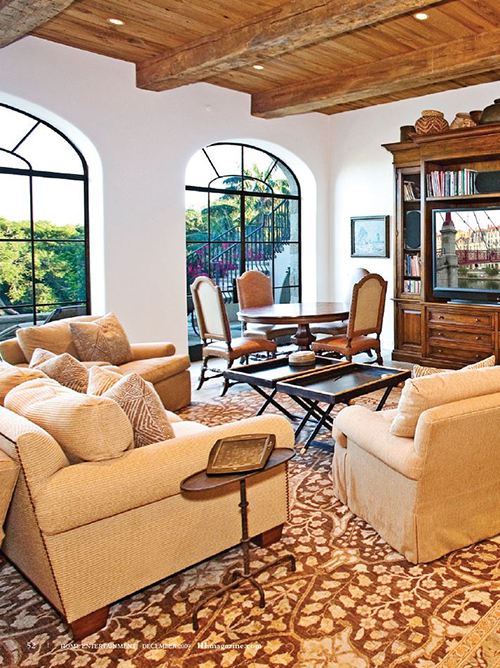 Have any of your clients asked you to conceal audiovisual technology to this extent? Absolutely. Many of my projects involve this type of approach. I find the male gender prefers not only the latest-and-greatest equipment, but men often want to have it in full view. Most women want it out of sight when it’s not being used.

So you’re not the kind of interior designer who’s appalled by an exposed flat-screen TV? No, I love flat-screens! What’s appalling are those 30-inch-deep dinosaurs that dominate the full room they occupy. I have 57-inch Sony flat-screen at home.

This home’s recurring design motif appears to be rich wood, which finds its way onto all of those lovely TV cabinets. Each custom piece appears to take on a similar design style. We had two extraordinary furniture-makers fabricate each television cabinet. The skill in the custom detailing and finishing is amazing. Nothing looks new—each cabinet looks as if it has been lovingly cared for over many years. The television in the family room appears as if it is an old European library cabinet. That entire environment is designed around that cabinet. This particular custom cabinet also contains the largest television in the house [a 73-inch Mitsubishi].

You’re being a tad too modest. You designed the overall aesthetic of each cabinet, right? I guess I might have been the driving force behind these pieces, but they wouldn’t have come together without everyone being on board. Charlie Starbuck of Starbuck Minikin is our genius cabinet- and furniture-maker. He’s worked on the most extraordinary estates in Santa Barbara. Don Nulty, the architect, was also very involved in all aspects of the cabinetry design, and the design of the house.

There’s a lot of math involved in these TV cabinets. How do you configure one perfectly? First, the equipment is identified. Then we worked directly with [custom installer] DSI Entertainment Systems Inc., and the cabinet-maker to assure that every technical requirement was met before the piece was manufactured.

Let’s move on to the TV cabinets in the kitchen, family/media room, the bedroom … those follow suit in slightly different ways? Given that there are many areas in the house to enjoy television, the client was very specific about not having a TV in the master suite. But there is an enclosed television in a guest room.
We thought it would be nice to create a quiet place to escape to if the husband or wife was not feeling well. Here, the television provides a great diversion. That custom TV cabinet and the one in the breakfast area of the kitchen have the ability to fully conceal the television screen when not in use. However, the large built-in cabinet in the family/media room leaves the television screen fully exposed at all times.

That particular television treatment, as well as the ones you orchestrated in the master bath and the home office, obviously strays from your overall hide-the-TV design approach. In some applications, being totally honest is the best solution. Both of these areas would have felt contrived if we tried to conceal the televisions. I also believe it’s more interesting to have variations in the overall design concept.

By “honest,” you mean that the televisions are out in the open and not concealed, right? Yes, that’s exactly what I mean.

You went to great lengths to camouflage every single speaker grill in the house—and there are eight pairs of speakers tucked behind these custom-crafted, vintage-looking covers. So the grills are made to look like old-fashioned air registers? They’re built into the cabinetry, and in the walls and floors? Yes. The client’s vision was that the house should look like a grand old family home—like those you would see outside Mexico City—with good bones. But they didn’t want anything to look ostentatious. None of the technology could be visible. As my client said to her husband many times, “Honey, I realize that what we are creating is expensive, but it should look like we didn’t spend a lot of money!” The husband is an extremely successful businessman, but I was never sure that he grasped his wife’s concept.

Besides all of the home’s concealed technology, there’s another interesting revelation in this story: The wife is the super-techy half of the relationship. She loves the latest gadgets. And because she understands technology, the custom installer designed a Crestron interface that works for both of them. So was it a challenge to come up with an interior design that makes both the techy and non-techy happy? Their vision was clear from the beginning. The wife wanted a high level of technology, but everything had to be kept, for the most part, out of sight. The husband wanted a system that was very simple and easy to use.

Sounds like there was no refereeing involved on your part. Both the husband and wife were on the same page in terms of the home’s overall technological concealment? Not only was intervention not required, they were both fun to work with. We were very much players on their team.

It’s rare for a house of this size and magnitude to not have a designated and proper home theater—especially in California. I’m guessing that a private home cinema would have been too overt for these homeowners since they wanted most flat-screen TVs hidden? They wanted something that felt more like a living room and in no way screamed “home theater.” The space they call the family/media room includes a wine cellar, bar, library, stone fireplace and game table. The mix of lounge seating, with several small occasional tables “While the kitchen’s stainless-steel appliances are state of the art, the balance [of the space looks like it] could have been built 80 or more years ago,” says Canada. In the kitchen’s sitting area, below, a cabinet-enclosed 50-inch Fujitsu TV stands front and center. This television is one of the home’s most-used sets since the couple enjoys watching TV while cooking. The leather chairs are from the homeowner’s private collection. that can be moved to accommodate a variety of entertaining possibilities, makes the room very multifunctional. At the same time, the design of this space makes it equally as comfortable for just the two of them.

There’s a strain of Mission style throughout the house, as well as some contemporary touches. And then there’s that lovely California look with stucco walls, beamed ceilings. I’d describe the residence’s overall style as Mexican-Mission. The home has a gently aged, quiet spirit about it. The living room has huge reclaimed oak wood beams, which were dismantled from an old barn. The space has always had the feeling of a chapel to me.

Any clue as to why there are so many televisions in this house? Are the homeowners in the TV or film industry? They both derive appreciation from the myriad of information—news and cultural—that is available on television.

Given the complexity of this home’s interior design, what was your biggest challenge? Attempting to make the final product even better than the client’s expectations. But I cannot take full credit for the design of any one of these cabinets. We had an incredible team—the architect, contractor, the furniture-makers. And this project had a client with great vision and trust. It was a wonderful collaborative experience.

And your biggest joy? Accomplishing the above.

For you, what was the most surprising thing you learned about technology? It’s amazing what kind of technology is available today for a residential application. By that I mean that it used to be that this level of technology was only applicable to commercial projects or professional recording studios. Today, the technological capabilities for a residential application are almost endless—from dozens of televisions to lighting elements and speakers scattered across a large house. It does help, however, to have the knowledge to use it all! 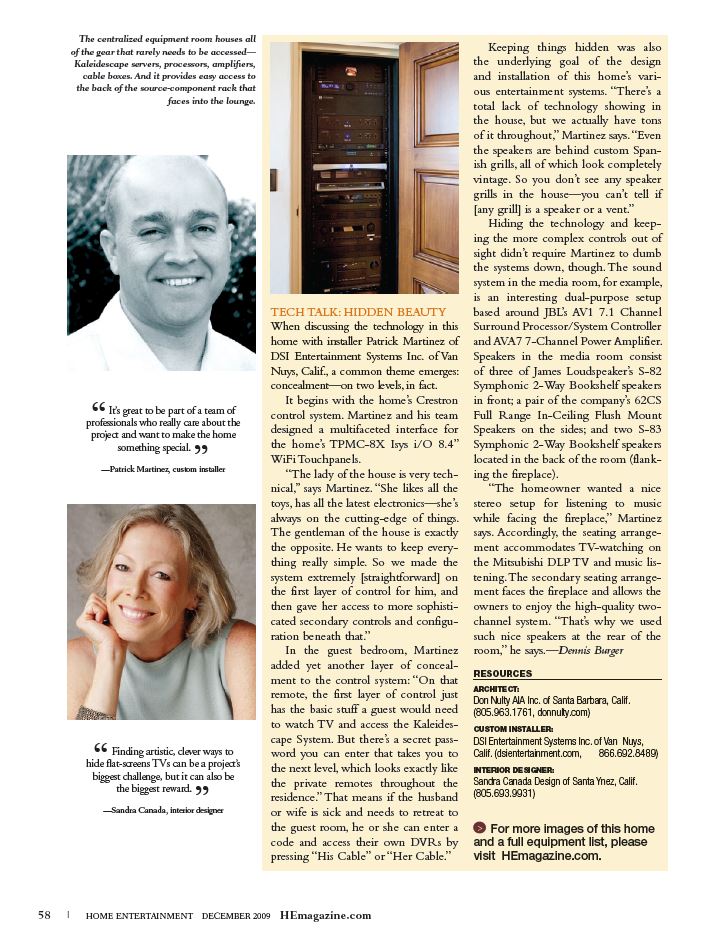